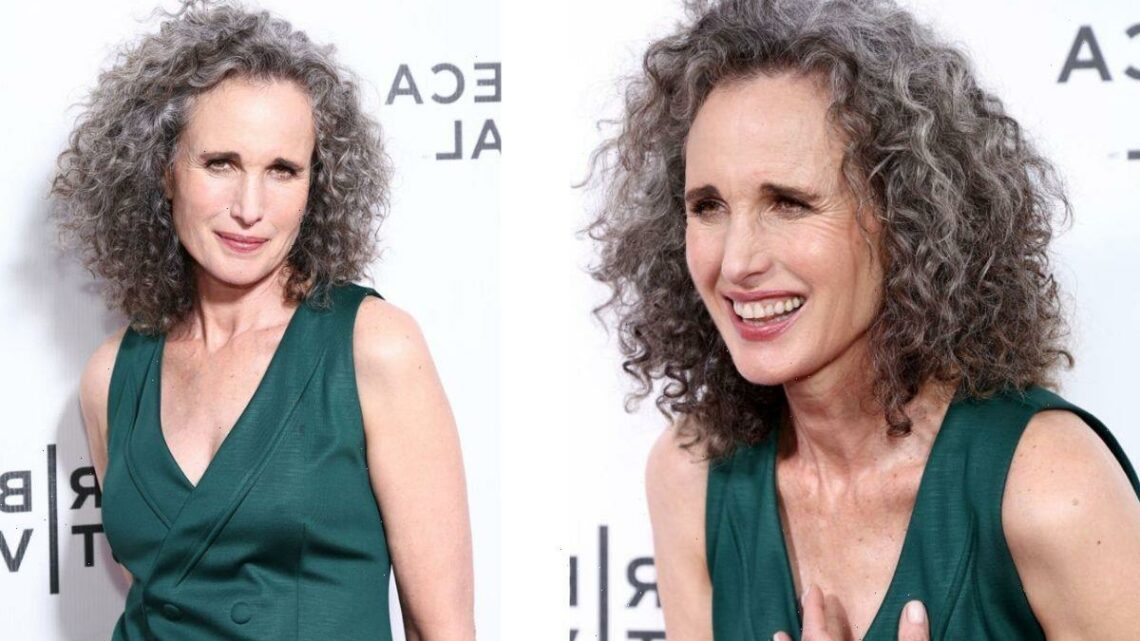 Andie MacDowell, 64, says ‘jealousy’ made her go grey as she talks post-menopause struggle

Andie MacDowell, 64, has revealed that she opted out of dying her hair during the coronavirus pandemic, leading her to embrace her natural greys. In a new interview, the star revealed that “jealousy” played a role in her new salt and pepper tresses, but admitted that she’s struggling to embrace another part of her body as she grows older.

The South Carolina star, who has recently celebrated the premiere of her latest movie, Good Girl Jane, says she was inspired to make the change after witnessing her sister do the same.

“She’s only 18 months older than me [and] she’s full-on silver,” Andie explained.

“I thought she looked so much more beautiful being silver. I was jealous!”

The stunning star insisted that she is “happier” and loves her grey transformation.

The decision to go au naturel, even on the red carpet, seems to have increased her confidence.

Just weeks ago, she was dancing the night away with Helen Mirren at the Cannes Film Festival.

Four Weddings and a Funeral star Andie looked effortlessly stylish in a vintage style striped gown and she let her salt-and-pepper natural curls hang loose for the occasion.

She and Helen had starred together in 2001 film, On The Edge.

“Eventually I’m going to be silver and I wanted to have this experience of feeling what it is,” she said to People at the New York Premiere of her new film.

The only thing that seems to perturb the star is the prospect of an expanding tummy.

Andie explained that her belly has become bigger as she grows older, adding that she feels she has been affected by the past stresses of giving birth to three children.

“I’m constantly having to work on loving that part of my body,” she confided, adding: “It’s so hard.”

“After menopause, your hormones change, your shape changes,” she added to the publication.

She added that she had a “perceptive eye” and noticed the fluctuating tummies of both herself and other older women in showbiz.

However her daughters have provided some perspective on that part of her body.

Rainey, 32, and Margaret, 27, who she shares with her ex-husband Paul Qualley, both work in the acting business too.

Margaret shared the screen with her mum in the 2021 Netflix series, Maid.

Now they hold her to the same principles that she has instilled in them.

“If I ever say anything demeaning about myself, because I’ve taught them not to do that, they’ll say: ‘Why are you doing what you told us not to do?'” Andie explained.