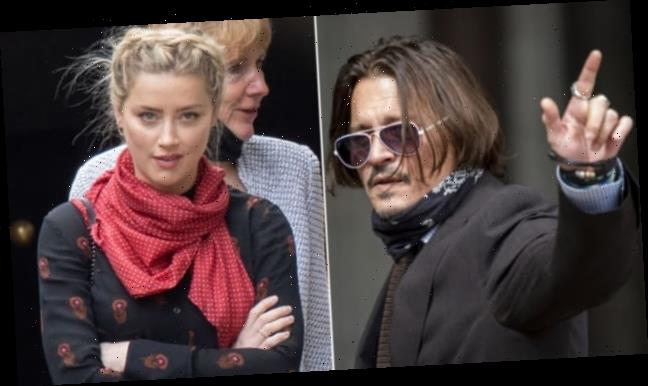 Amber Heard: Johnny Depp Threatened to Kill Me, Carve Up My Face

Another week of testimony is underway in Johnny Depp’s $50 million lawsuit against London tabloid The Sun.

And once again, court transcripts have yielded a number of shocking allegations about the behavior that took place during the brief marriage of Depp and actress Amber Heard.

Last week, Depp admitted to drug and alcohol abuse, but denied physically assaulting Heard, and doubled down in his claim that Sun reporter Dan Wootton had commited libel by claiming otherwise.

His lawyers presented evidence in which Heard seems to admit to abusing Depp, and they insisted that the Pirates of the Caribbean was the true victim in the relationship.

Today, in the same London courthouse, Heard was given the chance to tell her side of the story, and not surprisingly, it varies considerably from the version of events presented by Depp and his legal team.

“He had a violent and dark way of speaking,” Heard told the court.

“The way he talked about our relationship being ‘dead or alive’ and telling me that death was the only way out of the relationship; the way he would describe what he wanted to do to me if I left him or hurt him (for example, carving my face up so no one else would want me).

She said that Depp told her on one occasion, “I’m going to have to watch you get raped.”

Heard says that on a different occasion, Depp remarked that he would like to see her “get railed by a bunch of f–king fellas.”

“He demeaned me anytime I tried to wear anything that could be seen as sexy, calling me a ‘whore’, ‘slut’, ‘fame-hungry’ and ‘an attention whore’, but it got worse over time,” she told the court.

She says he blamed such comments on alchol and a “self-created third person, which he often called ‘the monster.’”

Responding to allegations about her own drug and alcohol abuse, Heard admitted to using MDMA and psychedelic mushrooms over the course of the marriage, but added:

“I have never had a history of liquor or substance abuse … although both my parents are alcoholics.”

This conflicts with testimony given by Heard’s friend and former assistant Kate James, who recalled the actress drinking “vast quantities of red wine each night.”

James also alleged that Heard appropriated details from her own experiences as an abuse survivor in order to craft a false narrative designed to destroy Depp’s career.

“As I perused the documents, much to my utter shock and dismay, I discovered that Ms Heard had in fact stolen my sexual violence conversation with her and twisted it into her own story to benefit herself,” James told the court.

“This of course caused me extreme distress and outrage that she would dare to attempt to use the most harrowing experience of my life as her own narrative,” she added.

“It’s very serious to take that stance [as an abuse victim] if you are not one.”

Actress and #MeToo activist Katherine Kendall also called into question the version of events reported by Heard and The Sun.

Kendall says she was misquoted in The Sun article that described Depp as a “wife beater.”

Far from accusing Depp of abuse, Kendall claims she actually texted a reporter and said, “Amber had hit him, which is why as you know I don’t condone ‘any’ violence.”

“I never meant to be in an article that called Johnny Depp a ‘wife beater,’” the actress wrote in a witness statement.

“I told you that I didn’t know that to be true at all!”

For obvious reasons, Depp’s civil suit against The Sun has become popular tabloid fodder, and it’s dramatically altered the manner in which both he and Heard are perceived by the public.