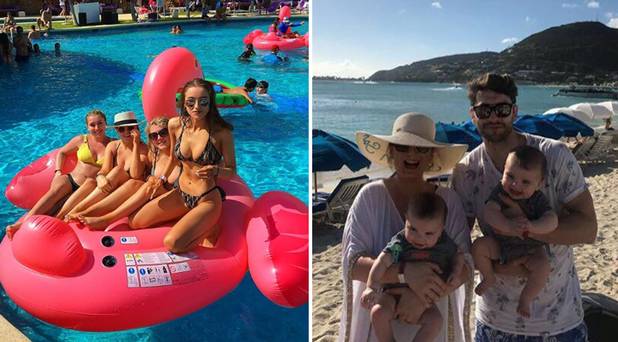 All-Ireland winners Dublin and Limerick have been enjoying the sun in dream destinations while the rest of us suffer from post-Christmas blues back in Ireland.

Limerick’s hurlers – who won the country’s first Liam MacCarthy cup since 1973 – have just returned from a dream vacation in two locations in the US and Mexico. The green and whites initially flew into Los Angeles, where their trip included sightseeing around Hollywood and they then ventured to Cancun in Mexico for a beach stay.

Dublin’s four-in-a row Sam Maguire winners took in Orlando and Miami in Florida and a cruise around the Caribbean. Many of the squad members from both teams have the added bonus of having their partners and children on holidays with them.

Chloe Walsh (21), who is dating Limerick hurler Andrew La Touche Cosgrave, is a model with Celia Holman Lee agency in Limerick, and has been sharing a number of envy-inducing pictures on Instagram. Walsh is becoming a one-to-watch on the Limerick social scene balancing her burgeoning modelling career with hostessing in Establishment Late Bar with her final year studies. Limerick Institute of Technology student Andrew (24), is a centre-back and squad member. “Best time with the best bunch,” she wrote. “Never want to go home.”

The Limerick squad posed for a group picture on Cancun beach, with all 33 team members soaking up the sun. Team captain Declan Hannon and his DJ girlfriend Louise Cantillon joined their friend for a trip to Isla Mujeres in the Gulf of Mexico, while ring wing-forward Aaron Gillane enjoyed a spin on a jet-ski with a friend.

Read more: ‘We sometimes wouldn’t see each other from one week to the next’ – Limerick captain Declan Hannon on making his relationship work

The Dubs started their trip in Orlando, where many of them checked out theme parks.”12-year-old me is very jealous of 25-year-old me,” beamed right corner-forward Paul Mannion at Disney World. Right corner-back Jonny Cooper clearly looked like he was enjoying sunbathing on a deck near a beach, posting “snooze button” on one picture.

Bernard Brogan and wife Keira Doyle brought their six-month-old twin sons Donagh and Keadán on the jaunt, which also included a visit to the Caribbean island of St Martin.

Most of the Dublin squad are now back in Ireland, but some stayed on a few days extra in Florida, where they caught a Miami Heat basketball game. It is tradition that the winners and runners-up in both codes of the All-Ireland go off on a team winter holiday together with their partners. Beaten finalists Galway and Tyrone have also just returned from trips abroad. The county boards for the respective teams organise fundraising events to cover the costs of the holidays, which are seen as not only a reward for their efforts but also team bonding exercises. Limerick sources have stressed that rumours billionaire business JP McManus funded their trip are untrue, although he has generously helped in other sponsorship ways.

How Did Chumlee From 'Pawn Stars' Lose So Much Weight, and What's His Goal?
World News