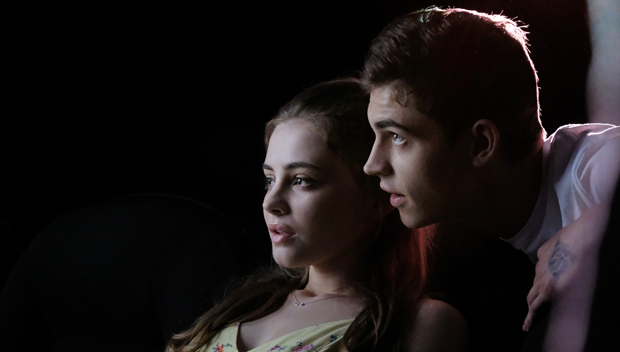 Anna Todd’s ‘After’ is hitting the big screen on April 12. HL spoke EXCLUSIVELY with Anna about casting Hero Fiennes-Tiffin and Josephine Langford as Hardin and Tessa, witnessing their epic chemistry, and more.

Anna Todd originally published chapters of After on Wattpad in 2013 as One Direction fan fiction, with Harry Styles as one of the main characters. The story follows Tessa Young, a dedicated student and loyal girlfriend, who falls in love with Harry and his bad boy ways. After became an online sensation and was published as a book in 2014. Harry’s character was renamed Hardin Scott. Now, After is making its big screen debut.

HollywoodLife sat down EXCLUSIVELY with Anna to talk about all things After. Since After revolves around Hardin and Tessa, we had to ask Anna whether or not she had a hand in the casting Hero Fiennes-Tiffin, 21, and Josephine Langford, 21, as the fan favorite couple. “I was in every casting meeting. I basically had the final vote if it was a tie or anything. I got to literally every cast person I wanted somehow, but especially with Hero and Jo, it was an immediate thing, and Shane, too, for Landon. There were some people that I was more willing to compromise on, or watch the tape again, or meet them again, but with those three, it was like, ‘Nope, it has to be them.’ With Hero, I literally didn’t go to any more castings after that. I just didn’t show up. I was like, ‘I’m not coming. Tell me when you hire him.’”

Anna also elaborated on what made Josephine the perfect Tessa. “She looks pretty much exactly like Tessa’s described and has the same mannerisms and even walks the same. It’s really weird,” Anna continued. “She’s so talented and so dedicated to the actual craft of acting. I think now it’s rare to find people who don’t care about Instagram, they just care about their career. She, like Tessa, has her whole career mapped out or what she hopes it will be and I’m sure it’ll be even better than what she expects. But there was just something about her. She was auditioning for Molly, and we had already cast somebody for Tessa. So we had to do some moving around and stuff, but the moment I saw her face I was just like, ‘Oh, she’s Tessa.’ And even when she was saying Molly’s dialogue it was like Tessa impersonating Molly. It was just this thing where I was like, ‘What can we do?’ And we literally called her and were like, ‘Can you fly to LA?’ And we just went rogue and did what we had to do.”

Anna also admitted that Josephine was cast so late that Hero and Josephine didn’t even get to do a chemistry read together before filming started. Thankfully, Hero and Josephine have incredible chemistry as Hardin and Tessa. “He had read with the other group of Tessas before we knew Jo even existed,” Anna said. “So we just literally were like, ‘Oh, I hope they have chemistry.’ Jennifer Gibgot [a producer] and I knew they were right for the roles. When the camera turns on they have so much chemistry.”

Watching them film their first scene together was an emotional moment for Anna. “I was crying, but I didn’t even know I was crying until everyone pointed it out. But it was in rehearsal and he didn’t even have his tattoos on or anything yet. He was just wearing black sweats and a black shirt and she was in her normal clothes. It was just insane and surreal to me. The more I got to know them, especially with Jo, she’s literally the Tessa police and the script police. She had this binder, which is such a Tessa thing, and she would say, ‘Oh, we did this so this won’t make sense if we do that.’ We got really lucky with those two. We hit the jackpot.”

It’s impossible to have everything that’s in a book in the movie adaptation. Anna explained some of the changes that were made. “There were characters that we just didn’t have time for, and hopefully we’ll have sequels to make up for it. But at the end of the day, it has to be about Hardin and Tessa,” she said. “Zed in the book, for example, has a much bigger role. I love Zed and Samuel Larsen, who plays Zed, has become a close friend to me. But when you’re watching a film, and if you’ve never heard of the book or haven’t read it, and then you see Tessa starting with Noah and 10 minutes later she meets Hardin and 30 minutes later she meets Zed, it’s too much. But in the book, it works because you have so much time, and you’re in their heads. That part of adapting was strange, just telling a complete story without telling the whole book story. But I’m really happy with the changes that we made. We made a lot of changes for diversity, which is something we all need to be better at. But when you’re writing fan fiction, they all are people, you don’t really have a lot of room to change things. But I’m glad that we did.”

In addition to creating the world of After, she also serves as an executive producer on the film. To top it all off, Anna makes a cameo in the movie! “It was so fun,” Anna told HollywoodLife. “It was the last day for most of the cast and crew because we just had a small group shooting the next day. We were at the end, and Jo and I are delirious in the bloopers. At first, I was like, ‘Oh, I’ve been watching this happen so much. I’ve been rehearsing with the actors. I’ll get on, walk in, whatever.’ It took us so many times because every time we looked at each other we just kept laughing. It was just so fun and cool. At the premiere the other night in LA, when the cameo came on you could see who knew the book. They all were so excited.”