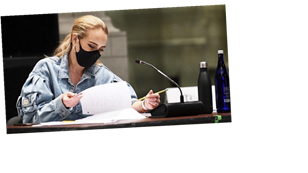 Adele has shared a behind-the-scenes look at herself preparing for her Saturday Night Live hosting gig.

The 32 year old, who recently gave fans a glimpse of her stunning traditional kitchen in her LA mansion, took to her Instagram feed to share the photo with her 39.1million fans.

In the picture, the star looked stunning as she wore a light blue denim baggy jumpsuit paired with pointed-toe boots. The Hello hitmaker rolled up one sleeve to reveal a gold bracelet and several other accessories on her wrist. Adele, who recently reportedly bought a £16,000 gold chain as a birthday gift for Skepta, swept her long hair back into a low pony-tail and donned a black face mask for the outing, ensuring she was protected from the ongoing coronavirus pandemic.

The Someone Like You star appeared to be smiling for the snap underneath her mask and wore her signature cat eyeliner and mascara as she flipped through pages of the script for the NBC programme, which she's due to host on 24 October for the first time.

In the caption, Adele teased the SNL show as she wrote: "3 days to go," followed by a black heart emoji. With over 1million likes, thousands of her fans flocked to the comment section to gush over the star and question when her next album will be coming out.

One person wrote: "Please release your album asap!!" followed by an anguished emoji as another asked: "so when is the album?" [sic] with a sideways glance emoji.

While a third impatiently added: "WHERES THE ALBUM PLIS". [sic] Celebrities you didn't know went to school together, including Kate Middleton and comedian Jack Whitehall

It comes as Adele recently gave fans a further look at her weight loss as she posted snaps of herself with Nicole Richie to wish her a happy birthday.

The stunning star shared a hilarious video of Nicole, 39, pranking Adele as she waited to scare her by hiding behind the entrance of a kitchen on Instagram. Adele then shared a photo of her looking stunning as she wore a furry white hat while Nicole stood at a window behind her.

The third snap showed the pair posing with a giraffe, Nicole could be seen smiling widely at the camera while Adele looked terrified at being so close to the large animal. In the fourth snap Adele showed off her weight loss as she wore her stunning blonde locks in a bun and had an off-the-shoulder black, velvet top on. The final photo posted by Adele showed her poking her tongue out while holding a wine glass while standing in a group of people, including Nicole.

As she shared the photos on Instagram, Adele made a gushing tribute to Nicole in the caption. She wrote: “Happy belated birthday to my daily dose of grace @nicolerichie I admire you and love you so much.

“You are the epitome of self preservation, self love and absolute savagery! You are so so cherished by so many angel girl! Keep making us laugh babes, we adore you to the moon and back” followed by a red heart emoji.