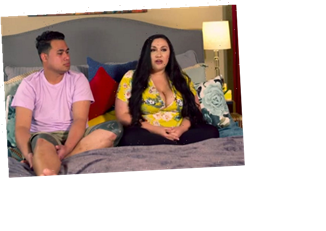 90 Day Fiance fans have already learned how NSFW Discovery+ can be.

But there is more to the brand new streaming service than showing never-before-seen footage.

They also have brand new spinoffs playing upon the original premise.

Love Games premieres on Discovery+ on February 8 and will showcase a whopping 24 couples.

There, these fan-favorite stars … alongside some less cherished cast members … will answer questions about each other.

Whichever couple knows the most about each other will be coronated as the winner.

Questions will be along the lines of “What’s something your partner thinks they’re good at, but really they aren’t?”

Another might be “If you could date anyone from the 90 Day Fiance universe other than your partner, who would it be?”

Clearly, while some questions will merely be trivia, others will be designed to cause problems on purpose, for the entertainment of viewers.

The first season’s case will include Elizabeth and Andrei, Robert and Anny, Steven and Olga, Anna and Mursel, Kyle and Noon, Darcey and Georgi, Benjamin and Akinyi, and Larissa and Eric.

We will also see Blake and Jasmin, Rachel and Jon, Alan and Kilyam, Angela and Michael, Colt and Debbie, Tania and Syngin, Emily and Sasha, and Stacey and Florian.

Couples will also include Kalani and Asuelu, Russ and Paola, Larry and Jenny, Brett and Daya, Evelyn and David, Corey and Evelin, David and Annie, and Tiffany and Ronald.

The cast includes some couples who are not in relationships.

Some of them are exes, of course, after public breakups. And one of those pairs, as you may have noticed, is the mother-son duo of Debbie and Colt Johnson.

It is also interesting to see that Larissa Lima and Eric Nichols are on the list.

It’s not just that the two of them are exes — they are not the only such pair.

But in September, Larissa was fired in a show of blatant discrimination against sex work.

It’s unclear what happened since then. If TLC plans to profit from old footage of her anyway, that seems hypocritical or even sinister.

Larissa did recently call out the 90 Day Fiance for hypocrisy for airing her story after firing her.

Her question was simple: if her innocuous CamSoda livestream was really so shocking that they had to break ties with her, why air her now? The answer, of course, is profit.

The season will include four rounds across 17 episodes.

Round one will last eight episodes, with three couples competing per episode.

Whoever has the most points by the episode’s end will then move on to round two, tournament style. The couple that comes in second place will have to compete in a wildcard round.

Round two will span four episodes, and have only two couples competing per episode.

This is the wildcard round that we mentioned. Whichever couple wins each episode will make it to round three.

Round three will also last four episodes, and constitutes the semi-finals.

In Round three, three couples will compete per episode.

The goal is to make it to round four, the finale.

There, the four remaining couples will face off — and one pair will be crowned the winner.

Nancy Pelosi Says If Donald Trump Isn’t Removed Via 25th Amendment, “Congress May Be Prepared To Move Forward With Impeachment”