Home » Celebrities » 8 Times Cardi B Has Given A Glimpse Of Her Baby Girl Kulture, 6 Mos. — Precious Pics 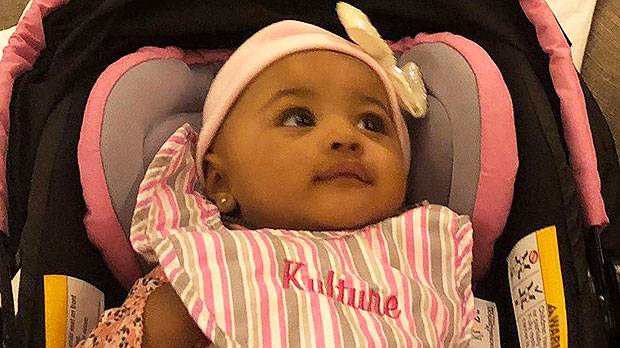 8 Times Cardi B Has Given A Glimpse Of Her Baby Girl Kulture, 6 Mos. — Precious Pics

Cardi B and Offset have mostly kept their daughter on the DL since her July birth, but photos of baby Kulture do exist! Take a look at the adorable glimpses the rappers have given fans!

While Kulture Kiara Cephus, six months, couldn’t be any cuter, her parents have been very careful to keep the little one away from cameras. In fact, Cardi B, 26, has only shared one full photo of her daughter, who she shares with Offset, 27. And after weeks and weeks of only getting glimpses of the baby girl’s tiny hands, kicking feet and adorable outfits, fans freaked over the first shot of her in a car seat. Not only was Kulture wearing a striped bib with her name on it in the December pic — too cute! — but she was wearing a bow headband as she looked off into the distance. With her pierced ears and her big eyes, she immediately stole hearts!

That same month, Cardi shared another look at Kulture, but this time, it was in a music video. That’s right, the the little one was getting breastfeed in “Money.” With her face hidden and most of her body out of sight, it wasn’t as revealing as the car seat shot, but it was still a sweet mother/daughter moment. But it’s all been quiet on the baby pic front since then, although Kulture’s fingers and toes will make occasional appearances on her mom’s Instagram story. Because even though the rapper was all about posting baby bump pics, that doesn’t mean she has to put her precious daughter in front of the camera for all her fans!

When paparazzi captured footage of Kulture without Cardi’s permission in October, the rapper explained why she was so against this. She wants her baby to be seen on her terms — and we don’t blame her! “People are truly disgusting and have no integrity,” she said in a since-deleted tweet. “Just because people are celebs don’t mean motherf*ckers sign a contract to be harassed and stalk.”

Cardi has taken control of her baby’s exposure to the public since the start, and we totally respect that!