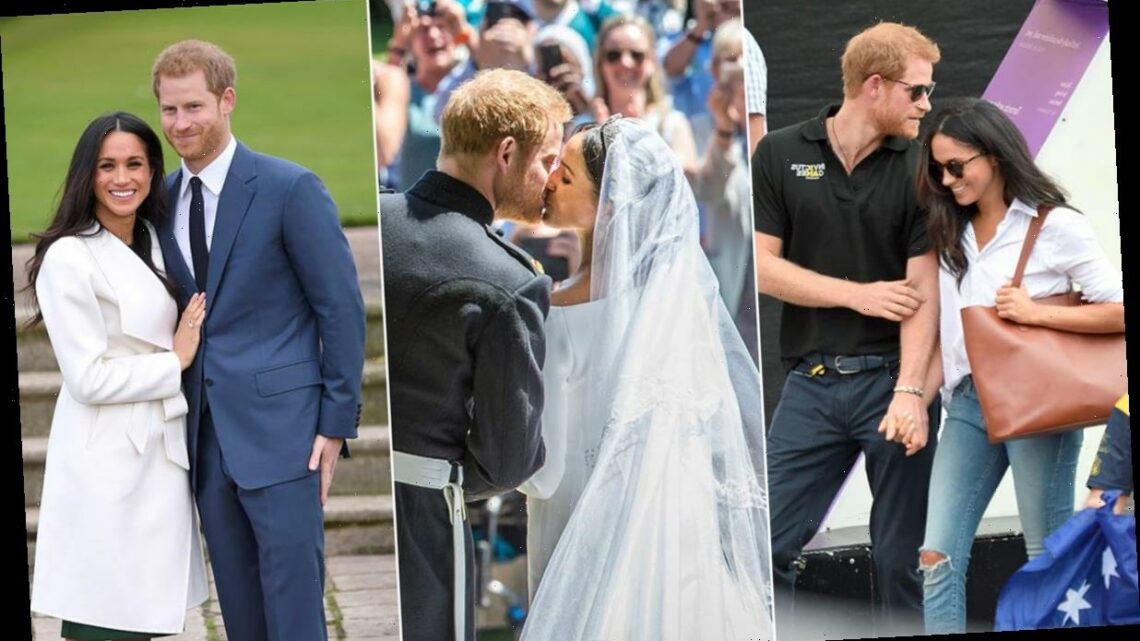 The Duke and Duchess of Sussex have been married three years this May and look more in love than ever judging by their recent public appearances in the US.

Ahead of Valentine’s Day 2021, HELLO! has decided to take a look at their unshakeable relationship.

They confirmed their relationship in late October 2016 – a few months after they had started dating – then later announced their engagement just over a year later.

Millions of people around the world tuned in to watch Harry and Meghan marry in a beautiful and grand ceremony at Windsor Castle in May 2018 and they have continued to enjoy watching their relationship bloom ever since.

The couple became parents for the first time in May 2019 with the birth of their son Archie Harrison Mountbatten-Windsor.

The Sussexes announced their decision to step back as senior royals in March 2020, but have continued to make public appearances to highlight charities and organisations close to their heart.

From holding hands on walkabouts, to subtle back rubs and public kisses, we take a look at Harry and Meghan’s most romantic moments together.

During a walk through Whakarewarewa Forest after their final royal engagement on the Australia tour in 2018, Meghan and Harry walked on ahead of their team to take a moment for themselves. Harry captured this moment on his iPhone, which resulted in this beautiful shot of Meghan cradling her growing bump in the great outdoors.

The Duke and Duchess shared the photo with the caption: “Thank you New Zealand for the most wonderful last week of our tour. It has been a privilege to meet so many friendly Kiwis.”

Harry and Meghan couldn’t contain their excitement while posing for the first photographs together at Sunken Gardens in Kensington Palace after announcing their engagement.

The pair embraced each other tightly, with huge smiles across their faces, while Meghan flashed her gorgeous diamond engagement ring.

But the sweetest press shots were taken from behind when they headed back inside together, arms wrapped around one another, ready to step into the next stage of their relationship.

The royal couple made their first public outing together at the Invictus Games 2017 in Canada, where Meghan lived for a period of time during her acting career. They shared some close moments together at the closing ceremony, when Harry was photographed kissing his fiance-to-be on the cheek. Not long later, they announced their engagement.

Meghan and Harry announced they were having their first baby together at the start at of their Autumn tour in Australia 2018. They carried on with their engagements looking blissfully happy. At one point, Meghan held an umbrella over the pair while Harry continued to give a speech in the pouring rain. As he was offered an umbrella, Harry joked “I’ve got my wife”. Afterwards, they shared what can only be described as the look of love with each other.

And, of course, a list of Harry and Meghan’s most romantic moments would not be complete without their first kiss as a married couple at Windsor Castle.They sent the cheering crowds and watching fans at home into a frenzy, after what was an emotional ceremony. It really was the most beautiful day!

MORE: 12 of the most romantic royal wedding kisses through the years

This couple like to take a more relaxed approach to royal protocol, which means we’re often treated to cute public displays of affection! When the pair shared a big kiss on the lips after Harry’s polo team won in a charity game in July 2018, it was clear that they were still very much in the honeymoon period just after tying the knot a couple of months earlier.

MORE: All the times royal baby Archie has melted our hearts

During the couple’s trip to Morocco in February 2019, Harry was spotted untucking his pregnant wife’s ponytail as she tried on a necklace. Such a sweet gesture!

The Duchess of Sussex was captured leaning contentedly on her husband’s shoulder as the pair watched children play football during a visit to a school in Morocco’s Atlas Mountains in February 2019.

The couple were spotted sharing a sweet moment together as they arrived at a reception in Cape Town on their Africa tour in September 2019. Both smiling and holding hands, Harry and Meghan were photographed gazing lovingly at each other.

This incredible image was captured by royal photographer Samir Hussein as Harry and Meghan arrived at one of their final royal engagements in 2020, before leaving for the US.

The couple beamed and giggled as they looked into one another’s eyes, with Harry sheltering them both from the rain with an umbrella. A camera flash behind them illuminated the shot, making it look like a romantic scene from a Hollywood movie.