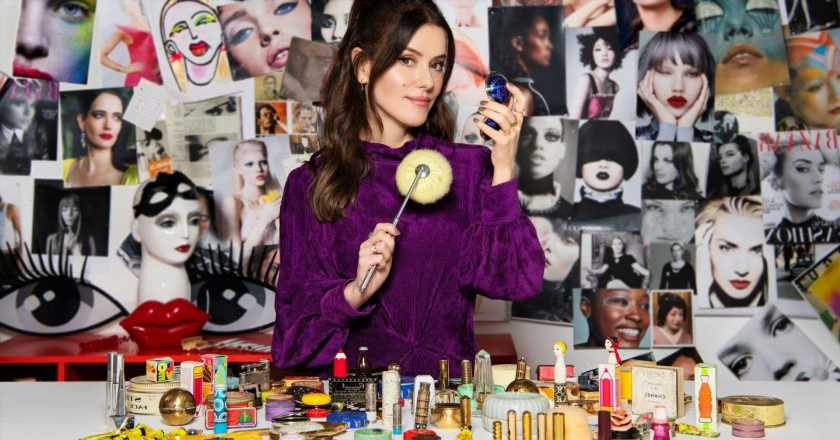 In her new BBC Two documentary, Make-Up: A Glamorous History, Lisa Eldridge explores how beauty trends were dictated by class, politics and religion. Here, she tells Stylist about some of her most shocking discoveries.

Beauty trends are constantly changing and while they are often credited to runways and celebrities, you may have never considered the ways in which history actually informs the make-up and hair looks of today.

Lisa Eldridge, one of the most respected make-up artists in the beauty industry, explores this in her new BBC Two series, Make-Up: A Glamorous History, which airs tonight at 9pm.

Inspired by her book, Face Paint: The Story of Makeup, £21.99, the three-part documentary explores beauty trends of three main eras, Georgian, Victorian and early 20th century, to highlight the lengths people went to when it came to their beauty routines.

Filmed during the pandemic by a two-person crew and Eldridge, the episodes will also delve into how money, class and status had a big part to play.

“There’s the 1780s, 1860s and then 1920s, so it’s about a decade covered in each episode,” explains Eldridge, who has been collecting vintage make-up for over 30 years. “In each episode, I’m also covering hair and social history. And, of course, make-up isn’t just about make-up – it reflects people’s attitudes, politics and religions.

“We eventually had to cut some stuff out as we had so much information, especially the Victorian era because they were so bonkers.”

Here, Eldridge runs through some of the most interesting things she discovered while filming, along with what you can expect from the new series.

What was some of the strangest trend you came across?

“I think that the Victorians were the strangest. Their attitudes were so warped and I could see why – they were so into science but they didn’t have any evidence because they hadn’t discovered DNA. So it was all these pseudosciences like phrenology, which meant that you would feel the bumps on your head and it would decide if you’re a good person or not. If you’re a woman, you could actually be asked to go to a phrenologist by a future husband to check that you are going to be a good mother or if you are going to be faithful.

“It’s really interesting to me because, in my opinion, this also played into the hairstyles as well. There was this very low bun that was very fashionable, which mimicked a pronounced bump to the bottom of your skull, like at the top of your neck. And if you actually had bumps there, that meant that you were the ideal wife and would be a really good mother.”

Low buns were a big trend in the Victorian era.

Did you come across any other strange beauty trends?

“In Victorian times, there were a lot of ideas about how shameful it would be to wear make-up. If you were caught wearing make-up, it was the end of your reputation – there was a lot of gossip and horrible satire about it.

“But then there’s this weird counter trend of wearing like loads of make-up, comparable to what we wear now. Salons offered this treatment called enamelling and you’d literally go in through the back door. There was one salon in Bond Street that was making a fortune – it was £1,500 pounds (by modern day money) to get your make-up done. The idea was that once you had your make-up done, it would stay on for about three weeks, that’s why it was so expensive.

“It was quite modern, they did face shaving and then the equivalent of a chemical peel with a very, very alkaline facewash, which would also take all the downy hair off. So sort of quite a bit in common with trends now.

“Then, they’d put on some bismuth paint – and bismuth is a metal, so it was very pearlescent. It was supposed to fill in all your wrinkles and pores. And then it was blush, followed by powder. Then they used a blue vein pencil. They drew the blue veins back onto the face on top of the heavy make-up so it looked like you weren’t wearing any.”

How do these trends reflect society’s attitudes towards beauty?

“For example, Madame Rachel, who was a woman in Bond Street that used to do the enamelling, had an advert that read something like: ‘So many times, a blemish can result in somebody becoming unloved, unmarried, unwept – like at your funeral, there won’t be anyone there. No one will hire you.’ I mean, it was so intense, the advertising, and it was so playing on women’s insecurities.”

“There’s a really shocking law that came into force in the Victorian era in the UK, so I’m talking around 1864. If you were a school teacher but had a little bit too much blusher on, for example, and a policeman or somebody in authority suspected – it only needed to be a suspicion, they didn’t need any proof – that you might be a prostitute, they could take you in to have your genitals examined. If the woman refused the examination, she could go to prison for up to a year. So you can imagine how much anxiety there was about your hair or make-up.”

Lisa Eldridge has been collecting vintage make-up for over 30 years.

“The Georgians are, I think, more joyful in some ways. But in others, really awful as well. You’ve got the height of the slave trade and at the time, there were only 300 families who’ve got all the wealth in the whole of the UK. They’re the ones dictating what is beautiful and their make-up and hair looks were just about showing off.

“They painted their faces bright white with ceruse, the lead-based make-up, which killed some of them because it was so bad. They also had pink cheeks and patches all over the face. Different shaped patches would be used as a secret language to communicate. It’s the same as Bridgerton – 300 families that are dictating fashion and style.”

In the Georgian era, people painted their faces with ceruse, a lead-based make-up, that was actually toxic.

Out of the trends you explored, do you think any still have a place in today’s society?

“I think blush, particular in the Georgian era, is really interesting because they thought about it the way we do now. The French court was extremely showy because of Marie Antoinette and she wore her blush in huge circles as a sign of status. That definitely came to England, but it was a much more subdued version. Throughout the Victorian era, and ever since, blush comes with connotations of looking fresh, young, pretty. Even the textures are quite similar to what I would use today, like liquid blush, and even powder blushers.

“And they had all these ideas about to find your perfect blush, like: ‘Put a hot flannel on your cheek, hold it for 30 seconds, remove it and then you’ll have the colour.’ There was lots of different beliefs around around blush and how it would enliven you and make you look fresher and younger and feel better – very similar to the marketing that you see today.”

Lisa Eldridge’s documentary ‘Make-Up: A Glamorous History’ airs on Tuesday 20 April at 9pm via BBC Two. The first episode of the three-part series focuses on the Georgian era.

Pat Sajak Blurts Out Answer on Wheel of Fortune, Contestant Doesn't Even Catch It
World News