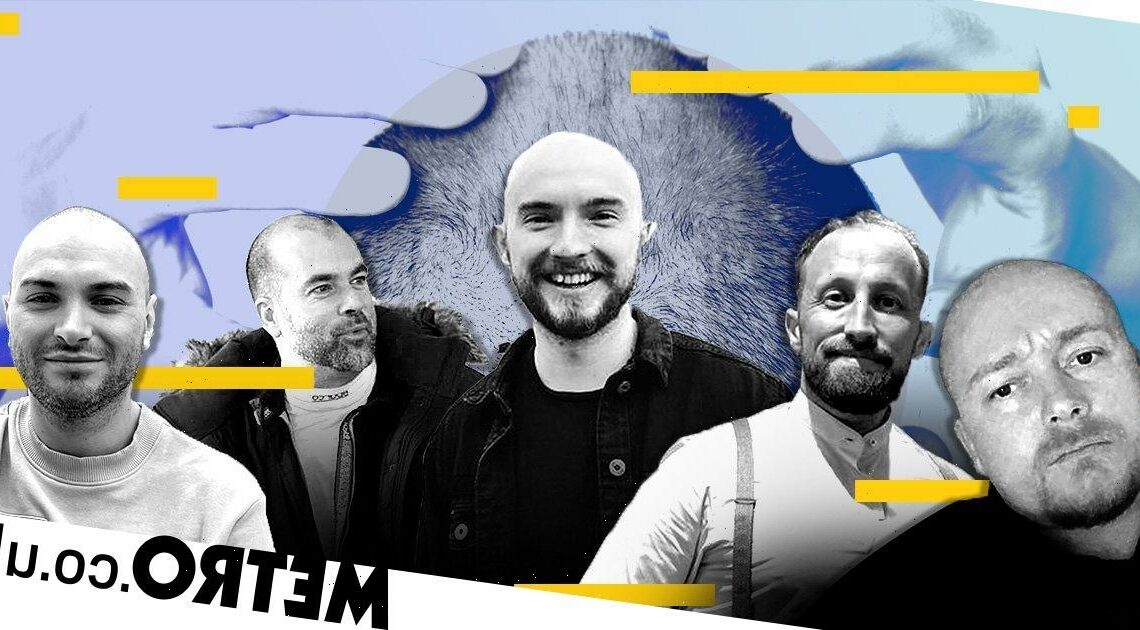 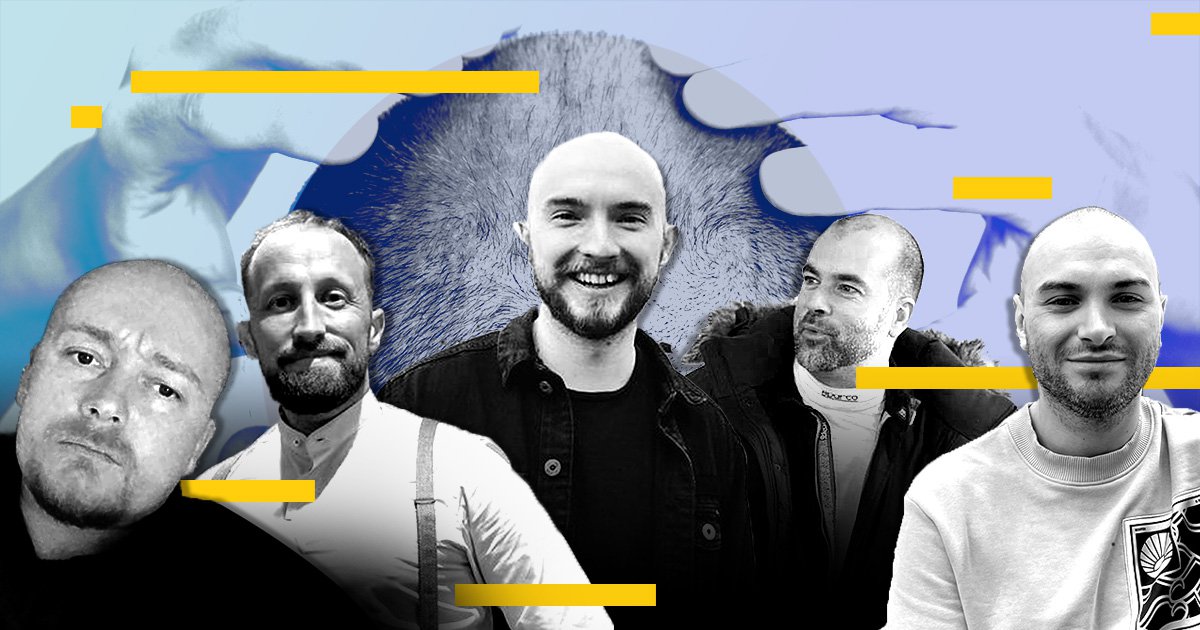 Going bald is no laughing matter, and yet men who have lost their hair frequently find themselves the butt of the joke.

A recent study in which 120 women looked at images of men with and without hair on their head, found that white bald men are viewed as ‘less successful and less attractive’ than those with hair.

This paints a rather bleak image. But many bald men don’t resonate with this depiction at all.

‘Quite the opposite experience in my case,’ said one man on a Twitter thread about the study. ‘Since going 100% bald [I’m] feeling much better and doing better with women.’

Going bald is a far more nuanced experience than that (limited) study would suggest.

Hair loss is largely regarded as an unwelcome experience – as for some it can lead to a loss in confidence, alongside an unhealthy dose of worry.

In men, it’s quite a common thing to go through.

Research by supplements brand Vitl found that 48% of British men over 50 suffer from male pattern baldness, and the average age for this to start is around 35 years old.

Hair loss in men is considerably more normalised than it is in women, but that doesn’t mean going through it isn’t hard or complex for some.

Metro.co.uk spoke to five men about their own journeys of losing their hair.

Richard, a 42-year-old working in eSports, believes ‘there’s not enough honesty on this subject’, admitting that for him, losing hair was an emotional experience.

‘I started losing my hair in my early 30s. It gradually thinned until really there was nothing left except very thin hair,’ Richard tells Metro.co.uk.

‘I had surgery (a hair transplant) three years ago after, I had exhausted all options.’

Richard had tried using Regaine every day for almost a decade, which was costly and didn’t produce the desired results.

‘I had even taken to colouring it to make it look thicker,’ he says.

‘Just looking at myself in the mirror was a bit of a traumatic experience. I think the idea of baldness, your appearance changing, is a very personal thing.’

Working in what he calls a ‘young industry’ made this feeling worse, especially in a public-facing role in which his appearance felt more important.

‘I couldn’t bare looking at my hair each day, slightly thinner than before. Hair coming out in the shower was very upsetting,’ he adds.

Eventually, he decided he’d had enough of feeling this way.

Over two days, he had two sessions of surgery in a FUE hair transplant in a bid to improve his confidence and self-esteem (which worked) – but getting there wasn’t easy.

‘Hair surgery was the most painful experience I’ve ever been through,’ he says.

‘Apparently it doesn’t hurt everyone, but for me it was excruciating – you really question yourself through the procedure.’

While not everyone feels the need to opt for a surgical solution, many bald men experiment with other less permanent methods to change the appearance of their baldness.

Ben, a 34-year-old PR Account Manager at Unlockd Marketing, has been made fun of for his baldness and so in years gone by has tried to get creative to mask it.

‘I started to notice a bald patch in 2015 and so dyed my hair blonde to hide it and grew a ponytail.

‘By 2020, my hair was getting thinner and the ponytail was getting higher, so at the insistence of friends and family, I shaved off my hair,’ he tells us.

He is still phased by it and has even tried regrowing his hair in the last year with little success.

Believing being bald ‘ages’ him, he now rarely goes out without a hat on.

This might not go down that well in the world of dating, as the unempathetic term ‘hatfishing’ (when a person wears a hat to ‘hide’ their baldness) has recently entered the dating lexicon.

Over on TikTok, there’s a new appetite for watching bald men undergo hair transformations. The hashtag #menweave has over 80,000 views.

But finding entertainment value in lost hair doesn’t do much for boosting the confidence of men going through the process of balding – especially when all the videos are of men ‘gaining’ hair back.

Speaking candidly, freelance journalist and consultant Andy, who is balding now, tells us he ‘hates’ his lack of hair.

‘Going bald is one of those things that, once it starts, is only going to get worse,’ says Andy.

‘Many body hang-ups you can actively do something about. You can eat better, exercise more, drink less booze – you can feel like you’re at least in control of other things you don’t like about your body.

‘But with hair… it’s just going.

‘Other than a hair transplant, there aren’t really many things you can do.

‘I am very outgoing and it doesn’t catastrophically impact me, but – like a lot of people – I catch sight of myself in a shop window or in a lift and I suddenly hate it. I don’t like windy or rainy days as they can make a sorry mess of what little hair you’ve got.’

Never having owned a hat until the age of 32, he now is ‘progressively investing in more’.

‘I used to have a cabinet full of waxes, gels and products, and now I just cut it shorter and shorter until, eventually I’ll have that stubbly plucked chicken look that balding men have,’ he jokes.

But not all men are so lucky as to have balding begin in their 30s – some men go through this even earlier.

‘At the time it weighed on my mind a lot as I was very young,’ says Mike. ‘I do miss having hair because it limits the looks you can have and to be honest I get pretty bored of being bald – although it is very low maintenance.’

It affected his confidence for a while and one night at university, while drunk, he shaved it off. Thankfully, he says ‘it didn’t look that bad’.

Now he’s used to being bald and his grown his beard longer which he says ‘helps’.

‘The reason I don’t really mind being bald is I’ve got good friends and only want to surround myself with people who want the best for me,’ he says.

‘No one has ever said a bad word about me being bald ever, aside from occasionally friends joking around but I know it’s in good faith.

‘It does affect my dating life online, as that’s predominantly based on first impressions and gives people huge scope for being picky. In person I’ve not found a huge difference – obviously some women won’t want to date a guy with no hair, but not everyone would want to date you even if you had hair.’

‘I would much rather have a shaved head than a comb over or have to worry about hiding bald bits.

‘Once you get out there and realise it’s really only hair, the confidence comes back and you can just crack on with life again,’ he says.

But it’s not easy for everyone to adopt that mindset – insecurities linked to beauty and appearance can have long-lasting impacts for some people.

Holli Rubin, head of multi-disciplinary therapies at The Soke, tells us: ‘Baldness can have an enormous impact on the confidence of some men.

‘With this physical change comes changes in their self perception and their overall body image. Their self esteem, at the core of who they are, might get knocked as a result of the changes in their physical appearance,’ she says.

Her own clients have reported feeling ‘disorientated and confused as they don’t recognise themselves’. So, it’s no wonder baldness is no laughing matter for many.

34-year-old Mat went on this journey himself, though now has come out the other side to the point where ‘it doesn’t bother’ him anymore at all.

‘I started balding at around 23, and I clung on to my hairline right up until people started making comments like: “Shave your head, it looks ridiculous”.

‘I fully committed to shaving it when I was around 27, getting a full number 0 shave once a week,’ he says.

His three brothers and dad all have thick hair, so at first going bald was hard to accept.

‘Once the initial shock from friends and family went away, nobody even mentions it anymore.

‘Nothing changed, I just stopped caring about it. I much prefer the low maintenance of it.’

Being bald certainly isn’t a barometer for success or attractiveness, as the men who have taken it in their stride will tell you.

Ultimately, most would agree that there is nothing positive or productive to be found in judging people based on their appearance. The best way to undermine stigma and shame is to remember that we are all so much more than what we look like.