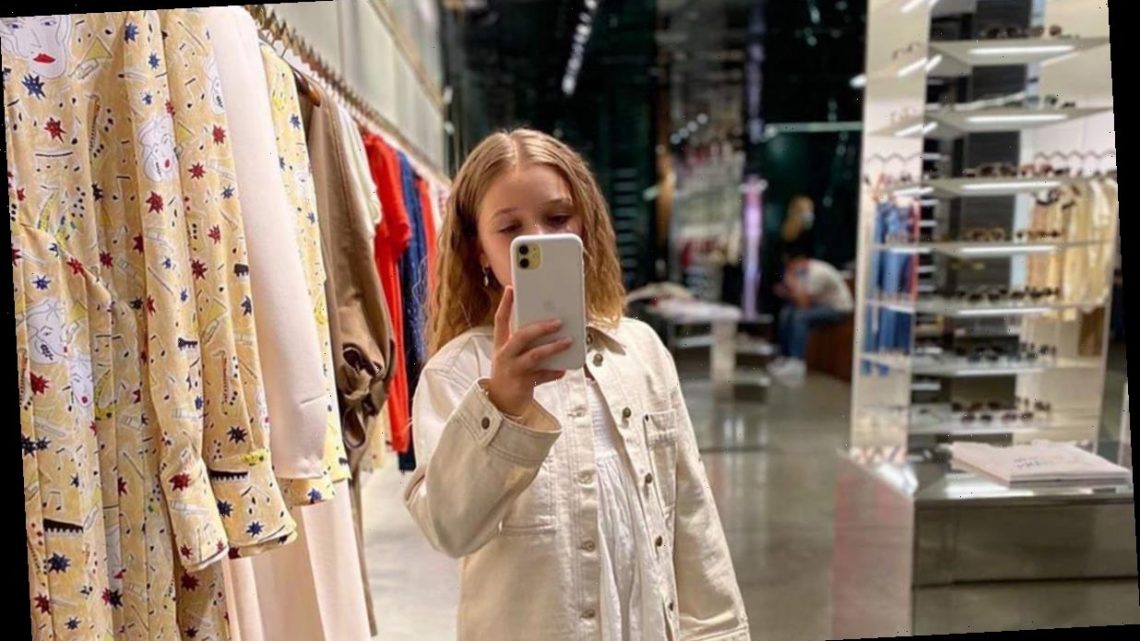 Harper Beckham really is just like her famous mum Victoria – they both love a selfie!

The nine-year-old enjoyed a day out at Victoria’s flagship store on Wednesday with her brother Brooklyn and his new fiancée Nicola Peltz.

WATCH: Harper Beckham films herself in a mirrored ceiling at mum Victoria’s store

While Nicola has shared some snaps of their day, which saw her trying on some of Victoria’s latest designs, including a £640 bold orange jumper which has been reduced to £256, it appears Harper had her own fun posing for her very own photoshoot.

On Saturday, Victoria shared some snaps of her daughter taking selfies in front of a mirror at 36 Dover Street, after she hijacked her mum’s phone.

Harper Beckham enjoyed a photoshoot at her mum’s store

Victoria also shared a clip on her Stories of Harper filming her reflection in the mirrored ceiling at her Dover Street store as she lay beside Brooklyn. Victoria wrote: “VB Dover Street takeover! @brooklynbeckham HarperSeven.”

Nicola Peltz and Harper enjoyed a day out shopping

Harper’s day out with her future sister-in-law isn’t the first time the two ladies have shown off their incredible bond. Back in March, as they celebrated Brooklyn’s 21st birthday, Nicola shared several pictures from the big party, one showing her and Harper holding hands.

“Dream baby sister,” the American actress captioned the shot. Another picture from the night shows Harper sitting on Nicola’s lap as they look at Brooklyn, who is sitting next to them. “The most beautiful night celebrating Brooklyn,” she said.