WHEN COMPETITIVE street skateboarding debuts in Tokyo, the judges will score the athletes based on the difficulty of their tricks (performed within a time limit) as well as originality, speed, and height. The focus is on the tricks—aerials, slides, and grinds on and off benches, walls, slopes, handrails, and stairs. They demand agility, balance, strength, creativity, and courage—to go for and nail moves you might land successfully only one in 50 times.

It’s that courage that makes the world-champion street skateboarder Nyjah Huston, 26, so hard to beat. As OG Tony Hawk wrote in Time’s 2021 Time100 Next issue, Huston’s “confidence and consistency have made once-in-a-thousand-type tricks a reality.” What’s more, Huston has never had a coach—“and I don’t think I ever will,” he says. “Skating is not like that—it’s really up to you on how hard you want to practice and how hard you want to go.” 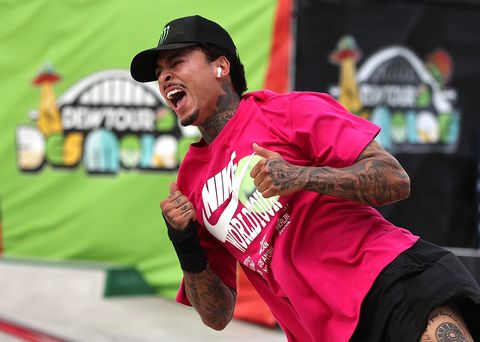 Huston has been going hard since kindergarten, when his dad introduced him to skating. His father pushed him at seven years old to skate rails over concrete (to be more technical) and to stop wearing a helmet (to be so confident that falling wasn’t an option). “A lot of the time, you know you can do a move; it’s just really hard to get that first try out of the way,” Huston says. “It was a constant [mental] battle because I’d be at this big rail, like I don’t know if I’m ready to do this. I’d be rolling up to it for a half hour to an hour, like What am I going to do? Most of the time, I would end up going for it.”

Those early lessons helped Huston realize the importance of commitment. In overcoming his fears, he adopted a confident attitude toward skating new surfaces, one of the hallmarks of his style. “Power and strength are most important for my skating,” he says. “I like skating big stuff, and you need the power to get on those obstacles and take the impact coming off. You need the strength to take the hard falls.”

Huston, who is five-foot-ten and 165 pounds, started weight training in 2018 to add muscle, increase dexterity, and prevent injuries. “Even in tricks where you have to spin your body 360 onto a rail, I felt stronger being able to get my body around in that motion,” he says. “I also noticed it helped with popping the board higher.” During the pandemic, Huston practiced tricks six hours a day. He’s primed for takeoff. He wishes the Olympics had added skateboarding earlier, “but at least it’s in there now,” he says. “I’m excited. It’s gonna be sick.”

SQUAT for Balance and Strength

Huston usually trains in the gym in his house in Laguna Beach. One of his favorite moves is a squat on a Bosu ball holding a 50-pound kettlebell, 5 sets of 15. “It’s good for your leg strength, ankle strength from the Bosu, and for balance,” he says.

Given his reliance on power, Huston has added explosive moves like box jumps to his workouts, while building his leg strength through cardio, such as sprinting 1,000 steps in Laguna Beach, riding a stationary bike, and hiking with a heavy pack. He also speed-runs down steps to improve his footwork and reaction time.

When Huston was a boy, his father always made him stretch. “I’d be so confused, like, I’m eight, nine years old—I feel perfect,” he says. “Now I look back and I’m thankful for it because I’m like, damn, it really does make a difference.” He starts each day with a True Stretch cage session and ground stretches for 30 minutes. He also uses Hyperice’s Normatec Leg System for recovery, as well as an ice compression machine on his knees and ankles.

Watch the Tokyo Olympics beginning July 23 and the Tokyo Paralympics , beginning August 24, on NBC. To learn the latest, visit TeamUSA.org

This story originally appeared in the July/August 2021 issue of Men’s Health.