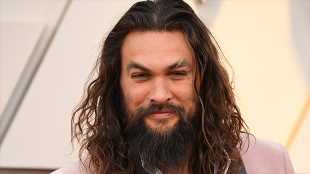 Jason Momoa no longer looks like his iconic ‘Game of Thrones’ character Khal Drogo. The actor shaved off his iconic facial hair while advocating for replacing plastic products with recyclable aluminum.

Khal Drogo hasn’t been on Game of Thrones for a while now, but it felt like he lived on since Jason Momoa continued going about his life looking exactly like the character… until now. After consistently rocking his incredible beard since 2012, the 39-year-old actor has finally parted ways with the facial hair, opting to shave it off in a YouTube video. RIP.

In the clip, Jason takes an electric razor to his face while standing in the desert. With every piece of hair that came off his perfectly sculpted chin, Jason said goodbye to each of his iconic roles (Drogo, Aquaman, Declan Harp, and Baba Voss). But this end of an era didn’t come without reason. The Justice League star decided to get rid of his beard to “make a positive change for the health of our planet.” Jason used the video to raise awareness about the harms of plastic while supporting a new range of water sold in aluminum cans that are “100% recyclable.”

After images of a clean-shaven Jason Momoa hit the Internet, fans flocked to Twitter to express a wide range of emotions over his new look. Some were supportive of the change, like @oneunity who thought the Aquaman star was helping the world in more than one way. “Respect to Jason Momoa, who’s just shaved his beard off (to encourage people to stop using plastic bottles) and simultaneously revealed a jaw line that might just save the whole planet,” the user tweeted.

However, some fans weren’t thrilled that Jason had to resort to removing his facial hair to entice people to recycle. “jason momoa shaved off his beard because you f**ks don’t know how to recycle and keep the planet clean. can’t believe i have to deal with a dying planet and now jason without a beard,” @sansaasnark wrote. Regardless of how you feel about Jason shaving his beard… please recycle.