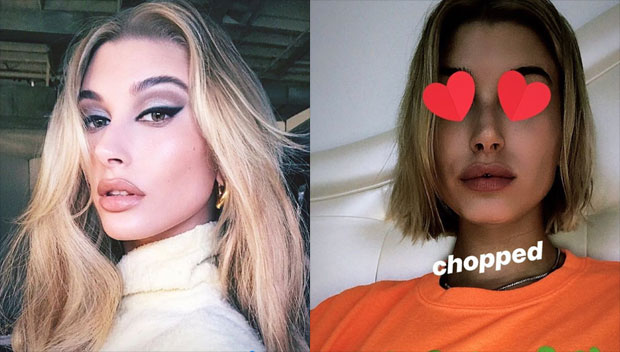 Hailey Baldwin cut her short hair even shorter! The model revealed her new ‘do on Dec. 12, which now dangles inches above her shoulders — see the shocking transformation, here.

After changing her last name on Instagram, Hailey Baldwin debuted her next big life development: extremely short hair! The 22-year-old model, who now goes by Hailey Rhode Bieber on Instagram, took to the social media platform to share a picture of her freshly chopped ‘do on Dec. 12. It appears that she got her hair snipped at New York City’s Cutler Salon, as she was photographed leaving the establishment on Dec. 11…see the photo below! Fun fact — it’s the the same joint her husband got his haircut at in August. Hailey’s previously shoulder-length hair now falls right below her chin, and we’re all here for the dramatic makeover. It’s very vogue, perfect for the beauty who’s a regular face on glossy editorials — in fact, her cover story for Vogue Arabia was just published on Dec. 10.

During the interview, Hailey admitted that having kids is now “a closer reality,” but not something that’ll happen “anytime soon.” The runway professional married Justin Bieber, 24, in a secret courthouse ceremony in New York City on Sept. 13. We’ve been treated to a parade of PDA pictures since, snapped in countries from England to Canada…but we finally got to see the pair in matrimonial white on Dec. 4! Hailey donned a bridal-style dress and Justin wore coordinating white trousers reportedly for a project with Vogue, according to a report from People. “It was the first photo shoot of them together as a married couple,” the outlet’s source said. “It will be the cover of Vogue…They wanted to do the cover as a celebration of their love.”

Hailey was still rocking her signature shoulder-grazing hair when the wedding-inspired photos surfaced last week, and it appears that the cut was pretty recent. She still had long enough strands to throw in a bun on Dec. 10, when she was snapped in a lemon tracksuit in NYC. It looks like Mrs. Bieber can’t resist a fresh chop, as she also rocked a similar length at the 2018 Met Gala…#TBT to the Shawn Mendes and pastel pink era.

The ever-so-sleek Hailey got even more chic. Check out even more celebrity hair transformations of 2018 in HollywoodLife’s gallery above!