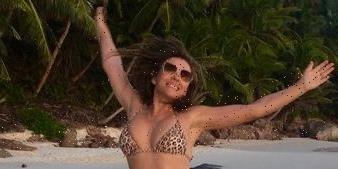 Elizabeth Hurley — a 55-year-old who seems to be aging in reverse — is celebrating her three-day weekend at the beach, showing off her “favorite” animal print bikini while frolicking in the sand. She also put her super-toned abs on full display.

“Hoo-ray, it’s a three day weekend in Blighty 😘,” she captioned the oceanside snap.

Her famous friends and fans filled the comments with compliments. Real Housewives star Lisa Rinna, another bikini pic queen, wrote: “BODDDDYYYYY” Another fan added, “That photo must of been taken 20 years ago lol, incredible.” It’s not a throwback, it’s Liz’s dedication to healthy habits.

Elizabeth is a bikini photo pro and has honed her workouts to fit right into her daily routine. On days when she’s not working on film sets, the Royals alum wakes up at 7:30 a.m. and starts exercising immediately — which is to say, she does squat reps while brushing her teeth. Elizabeth says she keeps up the squats for “as long as it takes to brush my teeth in the morning.” She repeats the same routine in the afternoon.

That’s not the most unusual sweat sesh in her schedule, though. She’s also a big fan of found fitness (“logging,” anyone?), she always goes for a morning walk with her dogs, a Labrador named Hector and a cocker spaniel named Mia. Her 30-minute strolls are “just fast enough to get my heart rate up,” she previously told Women’s Health.

“Fresh air frees you of all tension,” Elizabeth said. No wonder she looks so chill in all her bikini photos. You’re also more likely to see her getting her steps outside instead of on a treadmill. On vacation, Elizabeth mixes it up by addingyoga and Pilates to her routine.

As for her diet, Elizabeth starts her day with two mugs of warm water. “‘It tastes fairly disgusting,” she told Daily Mail UK. “But it’s fantastic for your digestive system.”

While her son was growing up, Elizabeth grew the family’s food on her own organic farm. “Obviously that’s not possible for most people, but supporting local farmers wherever you live is a good thing,” Elizabeth told The Cut. “I like simple, natural, easy food. I don’t really like food with a lot of chemicals or additives. When I’m at home in the country, I always try and eat food that’s grown locally. That goes for meats and vegetables.”

The combo of fresh food and fresh air is clearly working for Liz.

How do I watch Premier Sports and is Andy Ruiz Jr vs Chris Arreola on the TV channel today? – The Sun