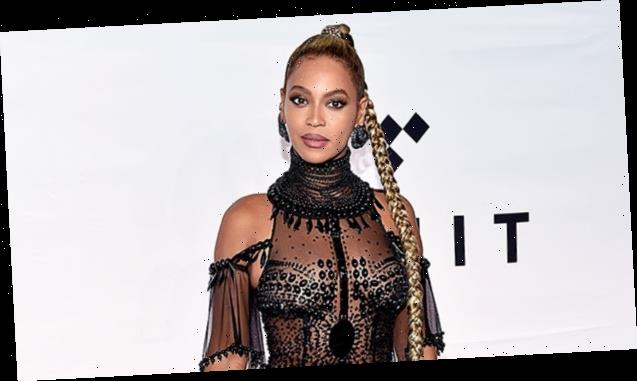 Beyonce. That’s it. The music icon looked stunning during an appearance on ‘Good Morning America’  to promote her new visual album, ‘Black Is King’ on July 30. Bey stunned with a fresh face and beautiful braids while previewing the new film.

Beyonce was simply glowing during a special appearance on Good Morning America on Thursday. The 23-time Grammy-winner, 38, who spoke from home due to the COVID-19 pandemic, shared an exclusive look at her new visual album Black Is King. The musical film will make its debut on Disney+ on July 31.

“‘Black Is King’ is finally here. I’m so excited that you guys get to watch it tonight on Disney+. It’s been a year in the making,” the mother-of-three said, explaining, “I worked with a diverse group of very gifted directors, actors and creatives from all over the world to reimagine the story of The Lion King.” Beyonce’s star-studded list of collaborators includes: husband Jay-Z, her mom Tina Knowles-Lawson, former Destiny’s Child singer Kelly Rowland, Pharrell Williams, Lupita Nyong’o, Naomi Campbell, and models Aweng Ade-Chuol and Adut Akech.

“The narrative story unfolds through music videos, fashion, dance, beautiful natural settings and raw, new talent,” Beyonce said before she revealed that Black Is King was filmed all over the world. “But it all started in my backyard. So, from my house to Johannesburg, to Ghana, to London, to Belgium, to the Grand Canyons. It was truly a journey to bring this film to life,” she said.

With Black Is King, Beyonce hopes fans will walk away more educated on Black culture. “And my hope for his film is that it shifts the global perception of the word ‘Black,’ which has always meant inspiration and love and strength and beauty to me. But Black Is King means Black is regal and rich in history, in purpose and in lineage,” she said, adding, “I hope y’all love it, I hope you enjoy it and I hope y’all see it tonight.”

The visual album will tell the story of “a young king’s transcendent journey through betrayal, love and self-identity,” according to a press release. With the help from his father and his ancestors, the king is guided toward his destiny and “earns the virtues needed to reclaim his home and throne,” GMA said. It is being described as “a celebratory memoir for the world on the Black experience.”