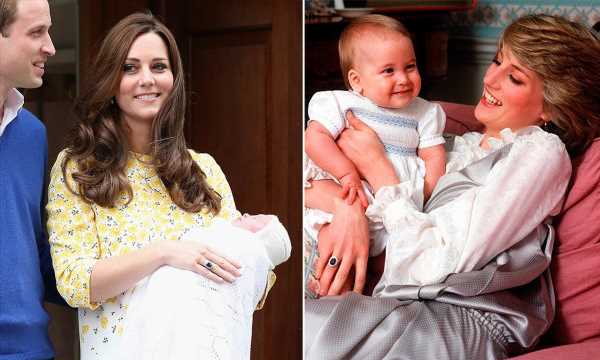 Princess Beatrice has just welcomed her baby girl into the world and we can't wait to see the first photo of the royal newborn with her proud parents. A new mother always has that beautiful radiant glow as they cradle their bundle of joy, and over the years some of these special mother-baby moments within the royal family have been captured on camera.

From the Duchess of Cambridge holding her babies on the steps of the Lindo Wing of London's St Mary's hospital, to Princess Diana with baby Prince William at Kensington Palace, we've seen some adorable photographs over the years.

In the photo above, the wife of Prince William looked so happy as she held her newborn son, Prince George, outside the Lindo Wing of St Mary's Hospital back in July 2013. Dressed in a blue and white spotted dress and her hair perfectly styled, it's one of our favourite pictures of Duchess Kate.

MORE: 10 most beautiful royal pregnancy photos of all time – from Duchess Kate to Princess Diana

The Duchess of Cambridge

Here we see a lovely moment between Kate and her daughter Princess Charlotte, again outside the Lindo Wing in May 2015. The royal gazed adoringly at her baby girl, who was all wrapped up in a pretty white shawl.

The Countess of Wessex

The Duchess of Sussex

We love this picture of Prince Harry's wife, Meghan. The royal, who is now expecting her second baby, held her son Archie close during the couple's royal tour of South Africa in September 2019. Meghan looked stunning and Archie a real royal cutie.

The Queen’s granddaughter looked such a content, relaxed mother in this picture, taken in May 2014 in Newport, Wales.

Zara, who is married to former rugby star Mike Tindall, carried her daughter Mia as she supported her husband at a celebrity golf tournament.

MORE: The coolest kids clothes to shop for Autumn – under £20

Aw, the look of love! Prince Andrew's daughter Princess Eugenie shared this photograph of herself, baby August and her husband Jack Brooksbank on her Instagram page in March 2021, following her birthday.

Eugenie wrote: "Thank you for the birthday love yesterday… I got the best present I could ask for!!"

What a beautiful photo of Her Majesty the Queen.

The date was 21 October 1950 and a then Princess Elizabeth held her baby girl, Princess Anne, who was dressed in the royal christening robe.

Such a fun snap! A newly-married Princess Diana holds her firstborn, Prince William, aloft as the mother and son share a giggle at home in Kensington Palace.

Diana looked beautiful in this next picture holding her second baby, Prince Harry. The image was taken outside St Mary's Hospital in September 1984.

Here we see a stunning black and white picture of the late Princess Margaret, the Queen's sister, with her baby boy, David.

The photo was taken by the baby's father, the Earl of Snowdon, who worked as a photographer before he married Margaret.

'The Flight Attendant' Adds Trio of Series Regulars for Season 2